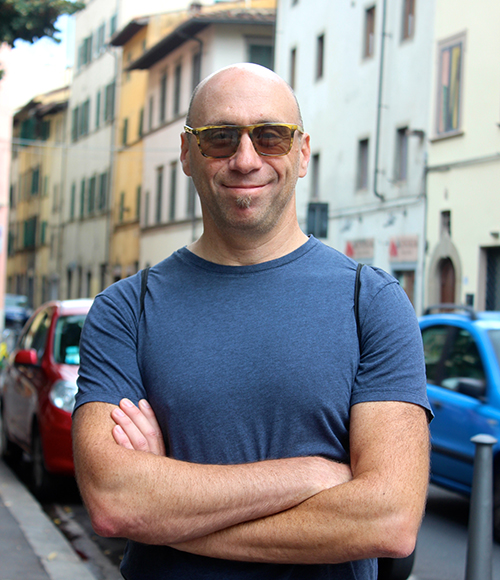 Joel Goodman is an Emmy-winning composer for motion pictures who lives in Los Angeles. He composes music for TV and film and has scored 4 Oscar-nominated films, over 25 Emmy-nominated television programs and documentaries, and over 100 total fims and TV shows. Joel founded Oovra Music- a music licensing business and uses Daylite as his go-to CRM and Project Management tool.

How did you find out about Daylite?

I have a bit of history using CRMs and project management software but when I first started it was all paper and pencil. I owned a music licensing company from 2001-2011 called Music Box and somewhere around half way through that time we started using Daylite. We were all Mac-based and it looked like a great solution. We really loved working with it. Then Music Box was acquired by another company and I took some time off from the music licensing world. Now that I’m getting back to it I needed a program. I looked at what was out there and everything else was online. SalesForce, Insightly, they’re all online. That wasn’t the best solution for us. I was really happy to see that Daylite was still out there. We’re a team of three using Daylite. I started a trial and everyone took to it like a fish takes to water. It’s worked out really well.

How were you using Daylite for your prior business?

Daylite was primarily used by sales people who were keeping tabs on prospects. Following up with them, setting calendar items to stay in touch with people in appropriate intervals. It was also great for them to use as a system to communicate between sales and accounting when licenses were being paid. At that time I used Daylite for reporting methods. I’d go into Daylite and see how many people someone called in a particular day or week. We could forecast revenue coming in. We were using it in a lot of different ways. For me I mostly used it for a managerial view of the company. Now with this new business, Projects, Tasks and Opportunities are key for us. Looking at Daylite on the sidebar, we’ve made great use of every one of these things.

How are you using Daylite for your new business?

We’re starting a new music licensing company called Oovra. The doors for the business aren’t open yet. I’m trying to start doing it the right way and get the proper work done before we open up shop. Right now we’re populating the database by putting our Forms in place and using Letter Templates for legal documents and emails. We’re already using it to help us keep track of projects and become more efficient. Even though there’s only a few of us, we’re pretty scattered about geographically. So we’re using Daylite as sort of a communication tool. If a task comes up I can just delegate it to someone and it pops up on their Mac or iPhone. So far it’s been really efficient for us in every way. The Mail integration is really key also –that’s how most of the business happens. Right now we’re building our database. We’re having some client interactions and getting clients that want to work with us before we’re even open which is great. The real tasks will come once the business starts.

We use Daylite in a sales capacity and we also use it as a project management tool. We have a lot of different projects going on that involve multiple people. It’s a little different than your typical office project as this involves liaising between directors, producers, musicians, and recording engineers. We manage both companies in one database because we wear many hats and it’s good to keep it in one place. Permissions become an important part. Sales people don’t see certain things and production people don’t see the same things that sales people do.

What are your favorite Daylite features?

For me, it’s seeing relationships between people and within other companies. The way you can link everything together is great. Taking Notes is big for me, and I love the Task feature too, especially being able to see my tasks in my calendar.

We use Forms for production. When working with music licenses there are some set things that need to go in the database so we use Forms to organize this. We can then export the Form to anyone outside of Daylite who needs it.

Another feature that will help us move forward is the Mail Merge feature. We have some Letter Templates for licenses, invoice requests, etc. When we’re interacting with our clients, it’s very personal. So it’s unlikely that we’d ever have a letter in there. But there’s a lot of other “paper work” that doesn’t have to become paper by using the Letter Templates.

How did you find the process of getting started with Daylite?

Instead of importing all our previous contacts as a VCard or .CSV file, we’re actually manually adding them in as we need. I find you end up spending a lot of time deleting contacts, so this way we’re starting fresh and only adding the people in Daylite that we know need to be in there. Whoever is the owner of that contact goes through and adds a Category and Keyword, and whatever else needs to be in there, that way all the info we need about a contact is captured because it happens when they’re created.

How have you customized Daylite for your business?

A big part of our business is everyone interacting online. We’ve added custom fields to each person’s contact record for Linkedin, Facebook, Twitter,etc so we can just quickly click the link and see what these people are up to. I’d really love to see Daylite with more social media integration so we can see a feed of these online interactions right in Daylite.

What advice would you give to someone starting a business?

Having done this a few times and now starting another new business, I sat with this for a while. I was trying to figure out what I wanted to do next. What I realized was that I needed to know why I wanted to do it. When you really know why you’re doing what you do, everything falls into place. It answers the questions of what you do and how you do. The “whats” and “hows” are functional and necessary. But the biggest differentiator and what brings happiness to most people, is understanding “why”. When you know why you’re doing something, great things can happen.