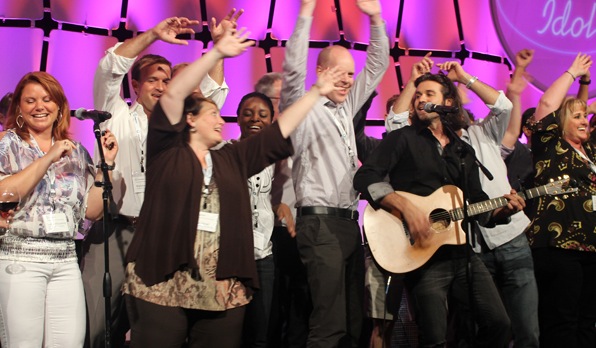 Billy Kirsch, Grammy & Emmy nominated, CMA & ACM award winning songwriter and President of Kidbilly Music, believes that music can be an important tool for team building. Billy, along with the help of his credited songwriters, works with companies all over the world, including Disney & Microsoft, bringing every employee together and creating soundtrack for their company while having fun.

Where did the idea come from to take your talent as a songwriter and apply it to team building?

As a credited songwriter in Nashville, I was asked to perform for student groups, country music hall of fame, and other community events. Sometimes at the end of the working tour we’d say to the group “you guys took a bus trip all the way here to Nashville, how was the trip?”. With the funny stories they would tell us, we would write songs for fun. I enjoyed being in the moment and creating a song with the group in half an hour. It wasn’t until I was talking with my brother, whom is a successful business man in New York, that I realized it was a great business idea. Before then I had never heard about team building but I was interested so I started doing some research.

How many songwriters are on your team?

There’s about ten songwriters that work with us. Some work with us once or twice a year, it all depends on the size of the group we’re working with. The office regulars are myself, our travel and production coordinator Nicole, and our Chief Razzler Dazzler Lauren who is a Tony nominated writer.

What type of companies do you normally work with?

We’ve worked with Walt Disney, Microsoft, L’Oreal, Encore Health Recourses, etc. We generally work with medium to large sized companies as they have the infrastructure and the budget to do team building. We work with a lot of non profit organizations and associations where they need to come together and meet.

How does team building help these companies?

The goal is to get their group together to have fun. They’re stressed and they need to break down some barriers, clear the air, and get to know each other in a fun and interactive way. Often we work with international sales and IT teams where people will come together from India, Belgium, South America and all over to mix and mingle, learn better business practices, and learn how people in other geographical areas of their company are solving problems. It helps people to communicate in an unhinged way. You may have the CEO and the delivery driver of a company working together in a group and find that the delivery driver has more experience with song writing so they take more of a leadership role over the CEO. It’s an interesting way to change up leadership roles. The big picture is to really see who they are and what the company stands for and how they differ from other companies. It helps them discover what makes their company unique and special. We work with them to create a song that is theirs that’s all about their company and who they are. Sometimes after this process they realize they need to redo their website to make it more inline with who they are.

What’s one of your most memorable moments through doing team building?

We worked with a company that had grown from a small family owned organization to a large staffing company with many franchisees. The founders of the company took part in our team building program. When their team took the stage to perform the song they had written, the elderly founders spontaneously started dancing in the centre of the stage. Everyone in the crowd became emotional – It also highlighted the change of old vs. new as the founders were surrounded by the younger franchise owners.

How do you break down the barriers for people that are shy or unwilling to be involved?

Myself and my team members are accomplished performers with a lot of experience under our belt. We’re the ones poking fun at ourselves and making people laugh to take the pressure off them and make them feel more comfortable. We get everyone involved by asking ” What do you all do?”. It starts out broad and then we drill down to really what makes them different. Throughout this conversation we plug it into a song so by the time it’s finished people are so proud by the fact that it’s their song and they’ve created it that they’re ready to jump out of their seats to sing it. They feel such ownership in the process that they forget to be scared or nervous. We give people blow up guitars to play to get them more involved and people even play air guitar.

How does Daylite help with your workflow?

Being in the performing arts I had no clue what a CRM was but I soon found out that I needed one. I’ve been using Daylite for three years now and it really runs my life. If I need to check that the airline tickets are booked, or rent a guitar amp, or make a phone call it’s all in Daylite. For me, it’s like a personal assistant and I use it on my iPhone so it’s always with me. I can track opportunities when anyone sends an e-mail to inquire about the program. I can review my opportunities every week to see who I need to follow up with. One thing that’s been helpful is creative activity sets for team building. It helps me to track each step of the way.

What’s one of the features you enjoy most about Daylite?

I use Daylite Mail Assistant a lot! I used to have to cut and paste e-mails in a Word doc for client questionnaires. Now I can save my e-mails in DMA and it cuts down on having tons of different files. It's been life changing having access to saved e-mails in Daylite on my phone when I'm on the road. I use Daylite on my phone when I’m meeting people and adding contacts or appointments. I’m the kind of person that needs to write things down in order to remember them so the prompts in Daylite are huge for me. Now with the update it’s remarkable to see forms in Daylite that I used to have to open up my lapto to see. I use forms for facilitators so I know how many songwriters are involved in each project, as well as for inquiries and billing purposes.

How can Daylite help with the next step for your company’s growth?

We’ve just opened up a second office in Chicago so we can continue to grow. By the end of this year we’ll be up by 60% over last year. Daylite enables us to do a lot so I don’t have unnecessary overhead or infrastructure. To me, Daylite is an additional employee. And we’re looking forward to Daylite in the cloud.**