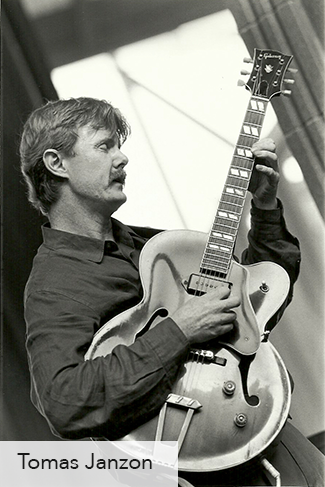 Tomas Janzon is a jazz artist born in Sweden that now lives in New York. Tomas tours around the world performing concerts and holding workshops to teach others how to write and play jazz. He has been playing instruments since he was about seven years old and plays jazz and classical guitar as well as the cello. Tomas juggles a busy schedule with many concerts and tour dates that need to be planned, in some cases, as far as a year in advance. Tomas uses Daylite to manage the business side of things so he can focus on creating beautiful music.

What I Love About Jazz Music

Everything. I love the rhythm of jazz, the freedom of expression, improvisation, communication, the creativity, and the inspiration. It’s all about the moment and being in the now, which so much about everything is really, but particularly in jazz because you’re making it up together on the spot. People always wonder “how do you practice that?”

Sometimes when we play a concert we will teach a clinic (or workshop) beforehand. I recently performed at a concert in Sweden where we played in a music conservatory. Before the concert we did a workshop with the students on phrasing in jazz music, how to improvise, how to play together and communicate. Communication is key. When you are on stage you are communicating with each other as well as communicating with the audience. You communicate with the other musicians when you’re making things up so you have to follow each other every microsecond. There were some great students in that workshop and afterwards two of the students sat in playing with us at the concert. I also teach a workshop where I talk about being a freelance musician and how to organize yourself (how to book yourself, how to network, etc.) I sometimes divide the workshop into two parts: the first is about concepts for improvisation-for both jazz and classical musicians, and the second is about being your own agent.

I get ideas sometimes when I’m practicing or while I’m having coffee in the afternoon. When I’m on a break and relaxing that’s when things start to crystallize so I write it down on a piece of paper or napkin. Then comes the work to make it a composition. Sometimes I write just a few bars at a time and come back to it again and again. Other times you need to just go with the moment and write it all out at once. There’s no rules. I start working and when you revisit it you see it from a different perspective than when you started. It’s enhances the piece. For me it works to set deadlines for myself. I work on new things and always have bits of ideas piling up, so I need deadlines for new recording projects to keep me on track. When it comes to composing for the jazz combo it’s usually a shorter, more condensed statement so it has to be a somewhat ingenious thing put together. It becomes a vehicle for improv. You need a hook, an interesting harmony, rhythm or melody, and to write melody is the hardest thing.

How Daylite Organizes My Business

I use Daylite to keep my contacts, projects, to do’s, notes, and appointments connected. When I have a potential tour, recording project, writing idea, or teaching situation or just about any new idea, I create an opportunity. I then convert it into a project after it is in some way confirmed and becomes a solid date or job situation. For instance, I created an opportunity some time ago for a tour I’m doing in Brazil in November. Once I have one date confirmed then it becomes a project. It’s practical and it’s a psychological thing too. I make it a project when it’s anchored. The first thing I do when I create an opportunity or project is connect the right people. Then by and by I attach tasks, notes, appointments, files, etc. Daylite is very useful in that way because everything is in one place.

How Daylite Helps with Practicing Music

Sometimes I use Daylite for practising. I will create a task where I connect the tune as a file. Maybe I have a sheet of music or a scribbled note and can attach it as a file to the task. When I’m ready to work on the song I open the task and have the attached file and sometimes a link to an audio version so I can open it up and start practicing right away.

Right now I have an active project for a tour of concerts I’m doing in Sweden in July. It started as an opportunity and then became a project when the first booking was confirmed. Now I have the appointments (concerts), tasks (usually phone calls), and emails all laid out inside the project. I can open a task or an email and see the music program or the photo attached for what I’m sending to the promoters or media in Sweden. For example, I have one task to “email the promoter the tour list with photos”, another to “send music program to the venue for printing”, and “confirm that concert”. These tasks all have dates attached to them and they can be placed in todays worklist so it’s a straightforward way to work.

This year I started attending a lot of conferences. I use Daylite to connect all the people I meet at these conferences, which is important. You have to follow up to make these conferences a worth while investment. You have to get back to the people after the conference so there are follow up tasks and work to be done. I use Daylite to set up follow up tasks and sometimes opportunities. I use groups in Daylite to organize people by geographical area so if I’m going to be in Brazil I have a group for people in Brazil and if necessary, subgroups for each geographical area that I may contact over there.

Growing My Business With Daylite

With Daylite, I am able to manifest more of my ideas and make more things happen. I have become more efficient and now I can keep up with my ideas and plan more tours in a year than before. I also believe Daylite alleviates stress because everything is organized so there is less to worry about. Being a freelance musician is an intense job because you have to do many things and preferably be the best at everything. It’s quite competitive. You have to keep track of all your performances, tours, recording projects, what you need to do, the next step,new ideas and follow ups. All this is on top of actually working the music- practicing and composing. I can easily check up all of that in Daylite, it’s great! You can make more things happen this way. You can juggle more balls at a time.

The new version feels lighter, faster, and easier to use. I can add a company to a contact right from Mail. It moves better. It looks cleaner and the calendar is definitely easier to read. There’s more space which is good for new ideas to ferment.