We Can Rebuild Her 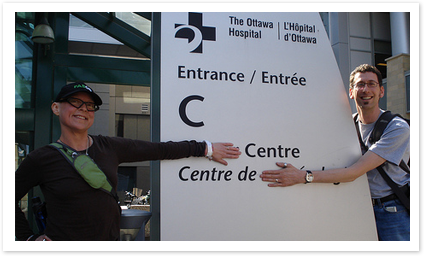 If you've ever had to deal with a cancer diagnosis in your family, you're probably familiar with the changes it imposes on your life how it plays with your cognitive focus. This is what my family experienced when my wife, Andrea Ross (wecanrebuildher.com), SMS'd me on October 6, 2009 with two big-small words: "It's cancer."

After I overcame the shock, I realized I would have to be Andrea's chearleading champion and primary support. I half-jokingly announced to anyone I spoke to that I was taking on the role of project manager of Andrea's treatment program. I also realized I would have to be coordinator of the family members and friends who emerged as our support system. In the process, I had to learn the medical language of cancer.

Daylite was the perfect tool to stay on top of our new life. It was my co-pilot. I maintained contact records and meeting notes for our new world which included a surgeon, medical oncologist, radio-oncologist, Breast Cancer Clinic case worker, Patient Designated Nurse (PDN) and a home care nurse. There were surgical prep appointments, an arsenal of tests, three surgeries and all the related recovery information, nuclear medicine appointments, energy treatments, blood tests, six chemo treatments over 18 weeks, six weeks of radiation treatment (30 in all) and port-a-cath flushes.

If that's not enough, our family still had to function as one. Daylite helped me keep track of our daughters' (then eight and ten years old) extra-curricular activities and invitations from friends and family who hosted them for playdates, ski outings, dinners and sleepovers.

I depended heavily on Daylite's ability to link appointments, phone calls, emails and contacts to task and projects. I kept good notes in the details and meeting minutes fields. I can't think of a feature of Daylite that didn't help me keep my wits about me.

Daylite Touch was a fantastic tool, as well. I used it to stay on top of everything wherever I was. Having said that, I couldn't have the 3G features of my iPhone enabled in most of the hospital, and I was more than conscious of the stigma attached to taking "handheld notes" during face-to-face meetings. So, I kept handwritten notes using my Livescribe Pulse Smartpen (livescribe.com) and attached the PDFs into appropriate records in Daylite. This saved me missing important information and allowed me to avoid a double entry note system. It was a snap!

I'm excited beyond words that Andrea's been given a clean bill of health. The busiest part of her treatment program ended in time for us to enjoy an amazing and re-connecting summer. She returned to work in September. She have another four years of Tamoxifen and has lingering discomfort from the assault on her body. You learn to love life and live it all over again.

Did Daylite save Andrea's life? No. Mine? Perhaps. We'll never know. What I do know is there's no way I could have kept my wits about me while tracking of all of the goings-on using any other personal organization software - definitely not as efficiently or effectively.