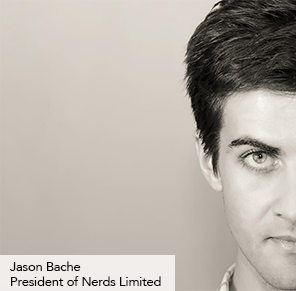 How did you start up Nerds Limited?

I started Nerds Limited about five years ago after graduating college with a degree in Psychology and Business. As part of an Entrepreneurial business class, I wrote a business plan and decided that I would start up this company as part of the business plan. During my final semester of college I finished my presentation by saying “Instead of dealing in hypotheticals, I decided to take everything I created, and see if it would work. Over the past 12 weeks, I’ve made \$2000.“ While I occasionally need an extra set of hands for a specific project, my only full time employees are the 5 computer monitors in front of me. I work almost exclusively on-site, visiting my clients at their homes and offices. What I do today is not just fixing. While PC and Mac repair was my starting point 5 years ago, it is maybe 10% of today’s workload. I combine, fix, and teach technology in the broadest sense of the term. I have roughly 400 clients who come to me with various issues from simple repair to relatively complex procedural issues for which I blend technology and training to suit the occasion.

What industries are most of your clients in?

My clients come from many professions – insurance, legal, medical, any profession really. The vast majority of them are educated, successful people whose careers didn’t directly involve technology. It grew up around them and then one day they realized there must be better ways to address the problems which kept cropping up around them. Believe it or not, I’ve found that just about everybody can benefit from some guidance now and then, regardless of whether or not they have systems and workflows in place. As the tech replaced more and more of their workflow, almost every procedure became more and more compromised over time until their process one day is entirely infeasible. Geeks and Nerds tend to be stereotyped as petty or anti-social. I love people and I GET technology. I’ve come to find they’re a combination in very high demand.

What do you enjoy most about being an entrepreneur?

If the only difference between genius and insanity is success, then entrepreneurs go from certifiable to wildly brilliant as their business grows. As a result, I, for one, crave novelty. Every day presents a combination of learning new things but also being able to really research technology without guilt. Usually, when you sit down, your average day’s work is in front of a computer. When you get lost in something you can either feel guilt or realize that for some reason you shouldn’t be doing that. I enjoy Nerds Limited because it affords me the the luxury of letting go of such guilt. I can dig deep and find the answers I’m looking for because, at the end of the day it all pertains to technology!

What are some of the challenges you face?

You have to mercilessly engage the parts of the job where you’re not naturally skilled. The hardest part of running every aspect of one’s organization is, historically, that the weaknesses of the individual can begin to become the weaknesses of the organization. You have to absolutely, positively beat yourself into doing the things you’re not good at–things you know you don’t want to do. Another challenge is recognizing the course and scope of what you can and can’t do by yourself. I still only have 10 fingers and can only be in one place at any given time. I firmly believe in on-site support because you can get remote support anywhere. If that’s really what people wanted, there wouldn’t be such a demand for what I do. This philosophy introduces a natural limitation on my ability to consult. To mitigate that limitation has required a lot of scheduling and some careful logistical coordination. I’ll try to schedule clients to minimize wasted cross-town trips, but there’s still a lot of time in the car. Despite this self-imposed on-site limitation, I have figured out how to make it both lucrative and enjoyable. I also listen to a lot of audio books. Although my clientele started out as entirely local, I’ve had clients that reach as far as South Africa. This is often because of a pre-existing relationship when the clients were in Albuquerque and then moved their business. For example, I have a client that was shooting a TV show here for a number of months. Since then I’ve done several remote support things because of our previous relationship.

What made you initially try Billings Pro?

It was the Apple Design Award you won. It got a lot of press, as Apple-related stories have lately. As Nerds Limited was just taking off, I found myself rebuilding NerdsLimited.com and paying close attention to design publications. Long ago, I installed a competitor app for a client and learned quickly what it could and couldn’t do. If my business was going to get to the next level, I realized that I had to invoice and had to track payments. Although 99% of what I sell is what I know, every now and then I buy a part for the job because it’s the convenient thing to do. Time is far more difficult to track, so the immediacy of a time, sync, send, and collect approach caught my attention. When Billings became Billings Pro I was very happy to spend what I considered a meagre amount compared to any direct competitor. Since I have an obscene number of mobile devices (iPad, iPod Touch, Android phone, etc.) which I’ve always wanted to sync with my previously iPod & MacBook pairing, Billings Pro was both cost effective and highly appealing. Billings Pro has an elegant approach to what is normally an extremely arduous process. This is coming from someone who has built databases. Good software is 9 parts thought and 1 part code. That was the experience I got when I first tried it.

How does Billings Pro fit your business?

My use-case for Billings Pro is probably not common. I don’t mail invoices because I collect payment on-site right away. The ability to turn out invoices from any device is extremely useful. Billings Pro hasn’t lost a single invoice in the last four and a half years I’ve been using it. I can’t say that about any other database I’ve ever used.

Would you recommend Billings Pro to other entrepreneurs?

I would and I have. My clients very commonly ask what I personally use to reconcile the issue at hand. I recommend the things I use when they fit the niche. I always recommend it, or I wouldn’t use it. Nerds Limited’s success is proof of the business model I’ve developed, and I’ve developed it around Billings Pro.

How has your experience with Marketcircle’s support staff been?

Fantastic! It’s very rare that I have issues. The worst thing I could say about Billings/Billings Pro in five years of daily use is the conversion to Billings Pro had a few glitches. Billings Pro’s central server still has the occasional security outage which is little more than annoying and definitely not a deal-breaker. As far as I’m concerned, such a track record, in lieu of what it offers is a total win! Normally I’ll get more feedback and not less. I’ll have a question and have multiple people making sure I got an answer, all within five or ten minutes of each other. They answer me before the ticket has a chance to show up in the system that it’s been answered. I work in the service industry. As a result, I know a bit about customer service and I’ve been really pleased with Billings Pro.